The 2010 Pusan-Fukuoka Sports and Tourism Exchange Goodwill Game was played!

On February 28 (Sunday), the “2010 Pusan-Fukuoka Sports and Tourism Exchange Goodwill Game” between the Pusan Lotte Giants and Fukuoka Softbank Hawks was played at Fukuoka Yahoo! JAPAN Dome.  This game was played as one of the activities for the “Pusan-Fukuoka Asian Gateway 2011”—a tourism promotion project implemented by the cities of Fukuoka and Pusan in an alignment.

In the ceremony held before the game, JTA Commissioner Mizohata delivered a message of greeting, following the mayors of Pusan and Fukuoka, and addressed the need to further promote international exchange through sports.  Also, actress Choe Jiu, the Tourism PR Ambassador for Pusan, threw out the ceremonial first pitch.

Hot, rousing cheers were given for plays by both teams by about 28,000 fans who gathered at the stadium from both Japan and Korea.

The Japan Tourism Agency shall further endeavor to promote sports tourism from now on. 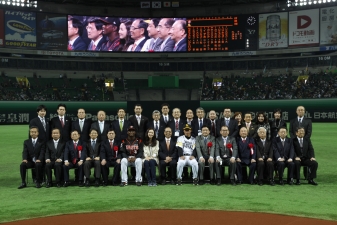 A scene of the ceremony before the game 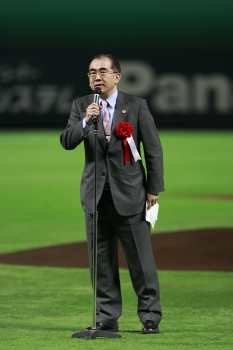 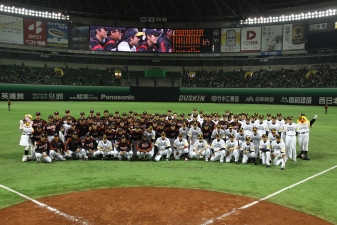 Players of both teams after the game
Return to Top