Call for films for the Second “Let’s Travel! Project” from August 1 (Sunday)

“SHORTSHORTS Film Festival & Asia (SSFF & ASIA)*” (Representative: Tetsuya Bessho (YOKOSO! JAPAN Ambassador)) starts to call for films from August 1 (Sunday) for the Film Festival 2011 under a collaboration project with the Japan Tourism Agency entitled “Let’s Travel! Project.”
This project was established last year and the two films received the award (Prize of the Minister of Land, Infrastructure, Transport and Tourism) in this year’s Film Festival as a result of the first invitation (see “Reference Materials” for overview of the films). We count on your active participation and are looking forward to encountering excellent films as the award-winning films this year for the next year (see Appendix for detail).
Best films will be screened in the 2011 Film Festival Premier, screenings held by the SSFF & ASIA inside and outside Japan (planned to be held in Mexico and Malaysia in 2010) and collaborating international film festivals held in overseas.
The SSFF & ASIA established a Japan-Korea joint project this year in collaboration with the “Asiana International Short Film Festival” as an effort for international collaboration from the angle of “image and tourism.” The award-winning films of the “Let’s Travel! Project” will be screened at the Asiana International Short Film Festival to be held in November this year. Also, the Japan Tourism Agency and the SSFF & ASIA are planning to make a short film as a joint effort between Japan and Korea.

*The biggest in Asia and the only officially-recognized short film festival by the U.S. Academy in Japan. In 2010, it was held from June 10 to June 20 in such places as Omotesando Hills, Laforet Museum Harajuku, etc. In the 12th Festival held this year, more than 4,000 films from 96 countries around the world were sent for 6 categories including the “Let’s Travel! Project” and about selected 100 films were screened. 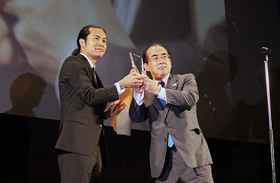 Hiroshi Mizohata, Commissioner of the Japan Tourism Agency gives the Award of the Minister of Land, Infrastructure, Transport and Tourism 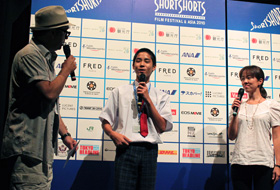 “Goat-Walking” Director: Ryugo Nakamura (he is only 14 years old and the youngest director ever!)
Return to Top