On May 12 (Wednesday), the Commissioner of the Tourism Agency, Hiroshi Mizohata, interviewed the free diver Ryuzo Shinomiya. Japan can be proud of Mr. Shinomiya for holding an Asian record, and as well as giving encouragement to him to do his best on the world's highest stage, Commissioner Mizohata also made an agreement with him to endeavor to communicate the attractions of the sea of Okinawa, one of the most beautiful seas in the world and one of the most valuable tourism resources throughout the world.

Ryuzo Shinomiya has been playing an active role as the only professional free diver in Japan. In 2008, he was the first Asian to exceed a depth of 100 meters at Baham Verticla Blue, and in 2009, he matched the record of Jacques Mayol, the first man to achieve skin diving beyond 100 meters, reaching 105 meters. At this moment in time, he holds an Asian record of 115 meters (fourth place in the world), certainly enough to for to be proud of him on the global stage as a professional free diver.
In addition to his rigorous sporting activities, he also has been carrying out educational activities in and projects to generate appeal for marine protection and the like.

Player Ryuzo Shinomiya talked to us as follows.

"The of is the most beautiful in Japan; I am convinced it really is a treasure of . I hope to bring the beauty of ’s sea to as many people as possible around the world. I was able to exceed 100 meters after so many year thanks to living and being able to train in for five years. Fascinated with the world of Grand Bleu and in gratitude for its attractions, I have managed to realize the first-ever world championship in Asia to be held in summer this year in . I hope players from the world enjoy the and communicate its superb impression to many people after they return home. Furthermore, if this meet finishes successfully, I am thinking of holding a project centering on parents and children in the beautiful as the next goal. I would heartily be happy if I could further communicate the wonderful impressions of the through sea kayaks and camps."

Free diving is a sport where people compete to see how deep they can dive with one breath, completely free from tank and breathing equipment. In Europe, centering on and , world record attempts and competitions have been carried out since a half century ago.
From June 30 to July 10 this year, the AIDA Free Diving World Championship 2010 Okinawa was held as an international free diving championship in . About 100 top divers in the world from about twenty countries gathered in the same venue to compete on the highest level. Mr. Shinomiya took part in this meets as a chief organizer as well as a representative of Japan. 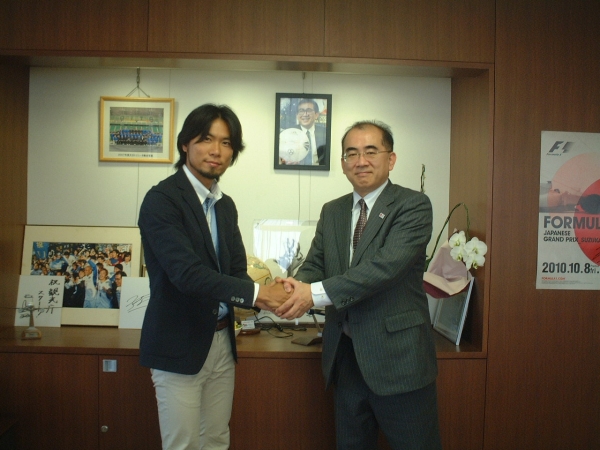