Minister of Land, Infrastructure, Transport and Tourism Mabuchi Serves as the Award Presenter in the F1 Japanese GP Finals.

Minister Mabuchi presented the winning cup to Sebastian Vettel for finishing in the first place in the Japan F1 Grand Pries Finals on Sunday, October 10!
This was the first time an active Cabinet Member ever served as the award presenter in Japan. He considered F1GP as an important resource of tourism of Japan, and the Minister demonstrated to the world that the Japan Tourism Agency intends to support the F1GP now and in the future.

Our “Sports Tourism Meister” Kamui Kobayashi, on the other hand, excited the 96 thousand spectators by mounting a spectacular overtake show!!

The Japan Tourism Agency will continue to value sports tourism as a valuable resource and an opportunity to show off our country and cooperate closely with the F1’s Japan Grand Pries! 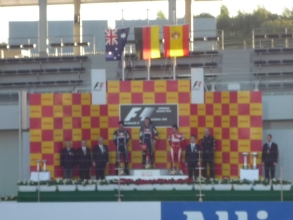