United Nations World Tourism Organization (UNWTO) convened its biannual General Assembly in the ancient capital city of Gyeongju in South Korea from October 8-14. Over one hundred ministers of tourism congregated in one place and open-minded discussions took place. 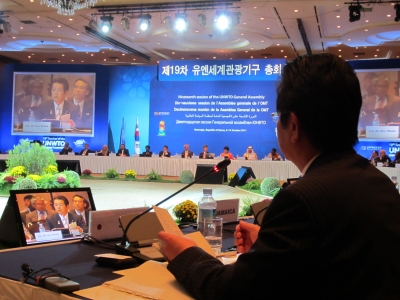 Vice Minister Okuda speaking at the ministerial round table
- Vice Minister Okuda represented Japan.
- On October 10 at the ministerial round table, he offered cordial thanks to all present ministers at the round table for their sympathy and support after the East Japan Great Earthquake.
- A bilateral conference with Commissioner Choi of the Korean Ministry of Culture, Sports and Tourism was held.
- Warm words were spoken of the disaster areas of the East Japan Great Earthquake in the welcome speech by Secretary-General Rifai of UNWTO.

Before the General Assembly, Secretary General Rifai of UNWTO visited Japan and met with Prime Minister Noda and Minister Maeda of MLIT on October 4 and proceeded to Sendai to attend the Special International Symposium on the Revitalization of Japan's Tourism Sector and Quake Affected Regions. 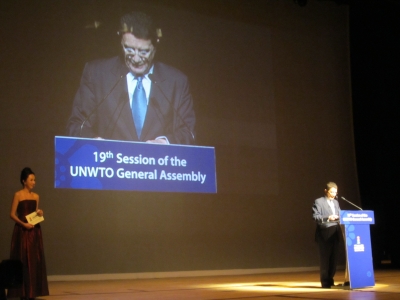 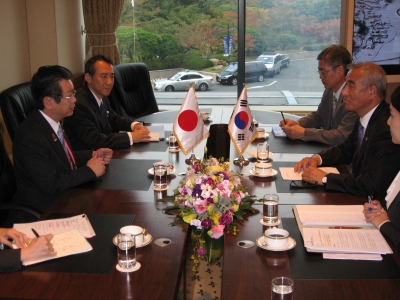 Bilateral talks with Commissioner Choi of the Korean Ministry of Culture, Sports and Tourism
Return to Top