Now launching a global campaign via SNS to promote the disaster recovery! If you travel to Japan and post a photo from your trip, you might win one day as the lord of a castle or other premium experiences in Japan, and you can receive a free Wi-Fi pass just for registering!
- Immediately following the earthquake disaster, there was a heavy drop in tourism to Japan, but tourism is recovering steadily, with tourism in June of this year exceeding pre-disaster levels for the first time.
- Using this opportunity, from September 1st, the Japan Tourism Agency is implementing a global campaign called “Share your WOW! –Japan Photo Contest-” using Facebook and Sina Weibo.
- Travel to Japan, and introduce Japan’s appeal to your family and friends by posting the “WOW!” photos you take of Japan.
- The people who post the best photos will be invited to an award ceremony in Japan, and will receive prizes including:
* Lord of Tsuruga-jo castle experience
* All-you-can-eat sushi at a Michelin Two-Star Restaurant
* Kamakura tour with Miss Japan
Winners will receive premium Japan experiences.
- Furthermore, as a special gift for entering, various prizes are to be given; 10,000 participants will receive a 1-week Wi-Fi pass for free, etc.
【Details】
1. Share your WOW! -Japan Photo Contest-Outline
- Register on the campaign website.
- Upload photos that fit one of the following 6 themes: “Cool!”, “Delicious!”, “Happy!”, “Beautiful!”, “Funny!”, “Miracle!”.
- The campaign website connects to Facebook and Sina Weibo, so uploaded photos will be shared with friends and others.
- Posted photos will be evaluated by the “WOW!” button on the campaign website, and the number of “WOW!” votes received will be included in the Japan Tourism Agency’s selection of the winner.
2. Campaign Website
- English, Korean, and Traditional Chinese Site
(http://japanphotocontest.jp)
- Simplified Chinese Site
(http://japanphotocontest.cn)


* The floodwaters of the Nakagawa and Ayasegawa River Basins’ small and medium-sized rivers are drained underground and released into the Edogawa River by Japan’s highly advanced civil engineering technology. As a result, Japan boasts the world’s largest underground discharge channel, which will be used for the awards ceremony. The location is subject to change based on weather conditions.
4. Prizes
Award recipients will receive one of the prizes below.
[WOW! Prize] 1 winner: Lord of Tsuruga-jo Castle experience
(1-day tour) in SAMURAI CITY Aizu Wakamatsu 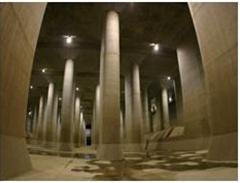 The “Surge Tank” of the Metropolitan Area Outer Underground Discharge Channel has the atmosphere of a massive a temple.