Meet The New JAPAN campaign – The Tokyo area’s biggest ever series of events aimed at promoting tourism to Japan!

1. Huge array of “Meet The New JAPAN Campaign in TOKYO” events set for the Tokyo area!
2. Packed schedule of events set to run for 18 weeks in Tokyo and Kansai!
3. Program kicks off in the Kansai Area with the massive “Kansai Mega Sale” launch event at Kansai Airport on December 1!
4. More than 800 “Authorized MJ Tours“ created and selling well overseas!
5. Official Facebook page scored more than 15,000 “Likes” in its first month!

The “Meet The New JAPAN Campaign 2013” has been launched by the Japan Tourism Agency. The campaign’s concept is that Japan has something for everybody, and that the Japan you will fall in love with is here waiting to be discovered. The campaign runs  in the Kansai area for the three months between December 1 and February 28, and for two months in the Tokyo region, from February 1 to March 31.

With around 10,000 stores, hotels, and restaurants taking part, “Meet The New JAPAN” is one of the largest ever campaigns aimed at overseas visitors to Japan.  Foreign visitors can take advantage of special offers and activities simply by presenting their passport.

Kansai Mega Sale
The Kansai Mega Sale sees national, Kansai local government, and people from the economic and business world joining forces to expand the scope of the sale over a much wider area than last year’s inaugural event. Simply by showing their passport, foreign tourists can take advantage of discounts and other special offers and at participating businesses and restaurants. 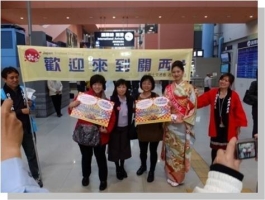