Promotion of MICE Hosting and Attraction

In order to increase Japan's visibility as a MICE (international conferences, events, trade shows and exhibitions) venue, we are implementing various promotions such as setting up booths at overseas trade shows. We are also providing practical support to organizers working to host and attract MICE.

MICE is an acronym for Meeting (corporate conferences), Incentive (corporate training and incentive travel), Convention (by international organizations and academic groups) and Event/Exhibition (including exhibitions and trade shows). It refers to business events that entail a large convergence of people.

Attracting and hosting international conferences have always been an important part of the JTA's policy. However, because promoting MICE outside of other conferences is also extremely meaningful in terms of increasing international visitors to Japan, as well as being critical to the economic impact and regional internationalization and revitalization, the JTA needs to boost MICE in general, not just international conferences. In view of this fact, the MICE Promotion Action Plan was drafted in July 2009 by a study group of stakeholders. The JTA actively promotes the hosting and attracting of MICE by playing a central part in the sound implementation of the MICE Promotion Action Plan, in committed partnership with the core MICE stakeholders. At the same time, it will take every action available to increase awareness of MICE in order to gain the public's understanding of the significance and impact of MICE.

About the Japan MICE Year

2010 marked a breakthrough in Japan's commitment to general MICE promotion in terms of the creation of the MICE Promotion Action Plan, and it also saw a number of important international conferences such as APEC and COP10. It was therefore designated the Japan MICE Year, with a number of undertakings implemented. The suitability of Japan as a MICE venue was publicized to the world through these projects, while at the same time, they served to inform the Japanese people of the significance of MICE, something that is not fully recognized. The existing policy mechanism and mindset of the parties involved was narrow-focused on attracting international conferences, and we enacted changes in such a way that the shift to promoting MICE in general was unmistakable, marking 2010 as the inaugural year of MICE for Japan. In addition, the Japan MICE Year was implemented as a part of the Visit Japan Year 2010, which aimed to achieve the Phase 1 goal of the program to eventually attract 30 million international visitors to Japan.

About the Japan MICE Year Logo and Slogan

Japan's unique culture and high technology, together with the opportunity for interaction with the Japanese academic, business and industrial community, give participants inspiration and flashes of insight that propel the further evolution of science and industry.
In Japan you'll find new ideas to make your meetings and events more productive.We offer you not only new ideas, but also the pleasure and satisfaction of success.
Come experience for yourself the future of events in Japan.

In cooperation with the Japan National Tourist Organization (JNTO), the JTA is implementing various promotions such as exhibiting at overseas trade shows to increase Japan's visibility as a MICE location. At the same time, it provides practical support to organizers and others working to hold and attract MICE. Please visit the JNTO Web site below for information or inquiries regarding holding and attracting MICE. 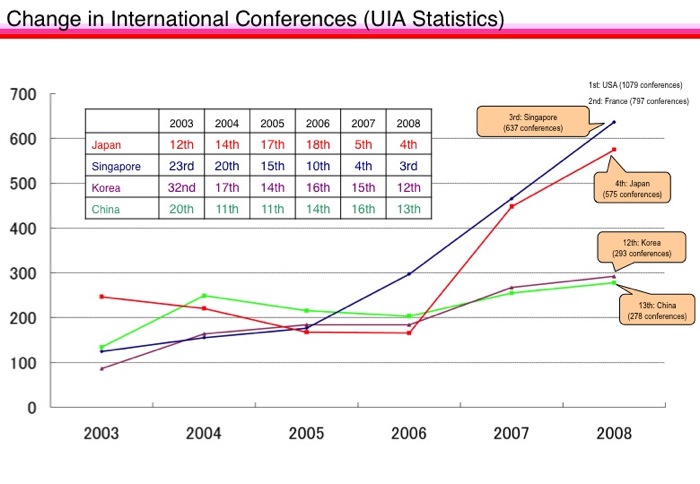 Japan is full of special venues which can be used by event planners. We would like to introduce some of the places which can be used for conferences or receptions.
Please visit the following page:  http://www.mlit.go.jp/kankocho/zh-tw/shisaku/kokusai/page07_000006.html
Return to Top