This tourism portal site is called the Spo-tour-navi and is operated by the Tourism Agency. Please visit us by all means!

There are abundant sport resources in Japan

First, in spectator sports, there are plenty of games ranging from professional baseball leagues and J-leagues that can be proud of their high levels and enchant a multitude of fans.
Next, in the case of practical sports, running, walking, cycling, etc. have been gaining popularity beyond generations, and the people gathering in sports events have been activating regions.
Moreover, Supporting Sports such as management of sports teams closely cooperating with regions, assistance for sports events as citizen volunteers, international game events backed up by states and regions altogether, and attractions for camps have been contributing to send effective signals for attractions.

Sports generate impressions, inspire communication among people and promote mutual understanding between different countries and regions. That is, it can be said sports and tourism are closely related.
At a time when the domestic demand by tourism has rapidly become necessary, we must make the best use of these attractive sport resources to make it a stimulus for the expansion of inbound and the promotion of domestic tourism.

Message from Commissioner of the Tourism Agency

Commemorative photo after an interview with the winner of triathlon
How are you all! This is an update of the last two months.


How did you spend the three consecutive holidays of July? I visited Tottori Prefecture for the 30th All Japan Triathlon Kaike Meeting. As a sport event rooted in the locality, iron men gave a wonderful showing in the race under the hot midsummer sun and high temperatures, invigorating each region in unison, with support from 4000 volunteers. I was also deeply moved by the aspect of cutting the goal tape hand in hand with families and fellows.

The following day of the meeting, I delivered a speech and acted as the presenter of special awards at the closing ceremony. I extended my message to all the people present with uncontrollable passion stemming from the impression of the players, who fought intense races, and respect to the people who devoted themselves to the operations for the meeting, including organizers, volunteers and others.

During my travel at this time, I visited the tourism resources located in various districts in Tottori Prefecture, in addition to attending meetings, and I realized that there abounded wonderful treasures such as nature, traditions, and local cuisines not to mention sports tourism resources. I felt it was a region with an enormous potential that will bring out sufficient effects for the expansion of inbound and the promotion of domestic tourism by packaging with story lines for these resources.

In view of sports tourism, the West district of Tottori Prefecture, with mountains and the sea closely located and satisfactory access from the airport, you can enjoy a full package of sports tourism, the harvest of sea and food from mountains, and obtain healing by soaking in a hot spring after experiencing various sports of both sea and land. Viewing from the aspect of nature, you can enjoy the beautiful Mount Oyama which has various features according to different viewing angles, and geo-tourism along the Sanin seacoast lately authorized as a geo-park, not to mention the Tottori dunes. Although I was guided by Governor Hirai himself, I was really overwhelmed by the natural beauty and magnificence, and my mind was relaxed to the extent that all my trifling worries were blown away.

Moreover, speaking of Tottori Prefecture, we can also mention a comic artist and mogul, Shigeru Mizukli! Not to mention the well-known GeGeGe Kitaro. Yonago Airport has taken on this ghost's name to become the Yonago Kitaro Airport, aiming to increase the number of tourists with concerted actions in the region. Although I experienced the ghost shower and Mizuki Shigeru way from the ceiling painting, I reconnected with Kitaro, well-known from my childhood, and enjoyed Kitaro's father (Medama-oyaji) and the wonderful impersonations. It indeed is a tourism resource that can be enjoyed by both adults and children of families!

In this way, there are plenty of regions offering inherent attractions and where sports and tourism can be truly enjoyed by visiting and experiencing them, not only in Tottori Prefecture but in everywhere throughout Japan. Since I will communicate to you the attractions of Japan’s tourism in the future on a hands-on policy basis like a salesman, please pay attention to my messages!! 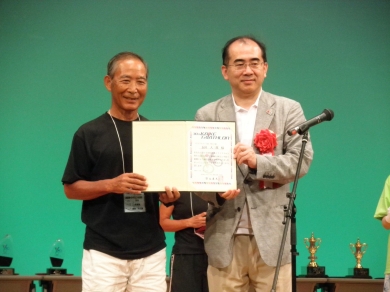 Conferring of special award (for finishers) 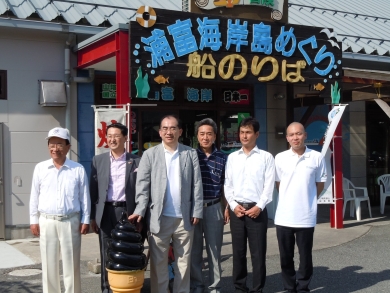 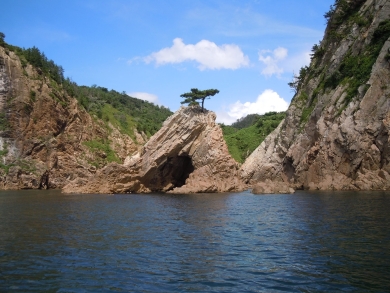 is full of wonderful sports facilities encouraging people all throughout to excitedly enjoy viewing sports or to actively take up sports themselves, whether young or old.
Viewing or taking part in events or sports held in the Tokyo area using the coupons in this free paper for can bring fantastic encounters a little different from shopping or sightseeing at famous spots.